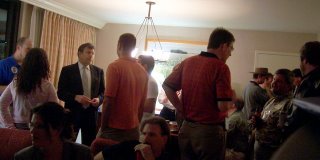 A few things to report over last weekend:

- We went down to Portland, Ore. for the www.LP.org National Convention.

- I met Krist and Jack* at the Porto Terra Pub

- I hung with Michael Badnarik and his crew quite a bit.

- We attempted to improve the National Libertarian Party to streamline the way it reaches out politically.

- I met hundreds of hardcore Libertarians. It was anarchy (and at times boring and tedious). Actually it was really well organized and pleasant.

- I realized the Libertarian Party flirts with brilliance and at the same time suffers some ailments any large body does, different views on the best way to succeed and proceed.

- I learned to have a new respect for those people who ponder ways to improve the system. After all we are promoting frickin LIBERTY. Who ever thought it would be so hard to sell 'Liberty' in America???. I have always said it is hard because we are promoting something people think they already have. And to a large extent (surely by comparison to other countries we have a lot of Liberty) we are doing quite well, but what good is it to be the healthiest patient in the cancer ward when we truly can be the healthiest kid on the block. We will truly make a difference when we can be a doctor/teacher to the other nations who are ailing so much.

Overall it was a great pleasure, though I am not sure if I will go to many in the future. It was spendy for the offerings and as any convention goes can attest, you should have a moment during the course where you say 'That was worth the price of admission'.

I had a few of those but not enough of my fellow compadres said the same.

My wish. . . ? May the people who want Liberty get together during the next two years and come up with some grand ideas to improve the Libertarian Party!

Was It a Lab Leak? The Mysterious Origin of COVID-19