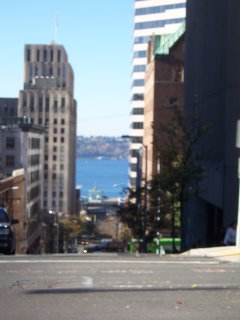 The last thing I want to do on this Earth is find a way to excuse a lifetime of not doing shit about shit. On the one hand, I am not as into politics as many of my rants may let on. I like to talk politics and philosophy but I also love writing music and screenplays. So the trick is choosing which path will be the most productive.

Sure, doing politics as a part time job (volunteering, mind you) can actually be a lot of fun. I get a kick out of talking with people about the world and what we can do to make it better. I also know that I am doing things to make the world a better place. On the other hand, I think that if I were to put my music together or finish a screenplay, that I would find a greater amount of satisfaction in that than just working for the cause. It also would broaden my approach to improving things.

It is simple. I am fed up with the never ending growth and abuse of government. And no I am not happy about pork spending even when it makes Seattle a better place. Truth be told we lost a large amount of that money by sending it to DC in the hopes some strong representative would bring a portion of it back (and tout it before elections how much they brought home to us).

I am tired of the loss of rights, from habeas corpus (which sounds like a goth band) to the diminished respect for property rights. Our communities, our schools, and our livelihood is now more dependent on who is in office than it has ever been before. This is not acceptable when it is democrats or republicans in office.

Sorry folks, I don't want G.W. Bush choosing what my kid learns in school. NOR do I want Hillary Clinton doing the same.

The more we centralize power, the less we individuals have choice.

Try changing the schools, the transit system or healthcare. You have to dedicate your entire life to a single issue, and many fail even after a lifetime of sacrifice. It should not be this way and I am willing to give some of my life energy to fixing this.

You are welcome to give your power away to elected officials. You can even trust them with delicate parts of your personal life. But you can not trust them with my rights. My choices. My life.

I, to quote Eddie Vedder, am mine.

So I suggest we do something that has not been done in dogs years.

We sit down and talk about what we can do to improve the world. And then, in the spirit of progress, we act accordingly. I am sorry to say but the real conversations have not yet been had. We sit and listen to professors yak about their ideal system, but look at what that cat dragged in. We are mired in social contracts that have no heart and even less compassion. Everyone passes the poor on the street because they gave at the office.

We have to start seeing those of who live around us. We have to rebuild our communities by talking with each other. And NOT just with those you agree with.

Why should you waste time with a neighbour that has an opposing yard sign for a candidate in the last election???

Because the alternative is war.

Because we are losing this polarizing, backstabbing , overly political and downright cruel struggle to control each others bad behavior through law.

Each year a new set of rights diminishes and we do what to bring them back.

Habeas corpus and wiretaps are this years drug of choice for the Fed.

What will it be next year?

Who will be left to stand up?

Best wishes to all of us,