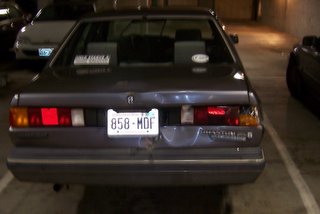 Indeed this new year has started of with a few bangs.

I ended last year with an unplanned trip to Utah for the holidays, which was brilliant. But two days before our departure I was rear ended by a semi on I-5 (this busted my driver seat and smashed up the rear of my vehicle as you can see).

I have since purchased a brand spanking NEW 1982 vw quantum and I am eager to see if the claim that it gets 35 mpg on the freeway is true.

It does have a new engine and seems to be a solid little unit, but you never know till you try it.

Here is a shot of my injured 1984 vw Quantum. I hope to get it to drivable shape and then perhaps scoot Deb into the efficient 82 model for a few months while she is in school.

I have not yet purchased a laptop for her, though Angie and Christian have offered really good advice on units. More to come on that later.

I started a monthly speakers club for the westside Liberty seekers and you can get an update as to who will be speaking by joining the group (its free folks) http://libertarian.meetup.com/46/

Now you do NOT have to be a libertarian to go and enjoy any of these events. We promote social tolerance and fiscal conservatism (which is different than neo-conservatism which is, in fact, conserving very little of it's original creed of limited government powers and now asking, nay forcing the world to live as it deems right. . . and. . and. . . was that a rant??? ah well, this is what blogs are for).